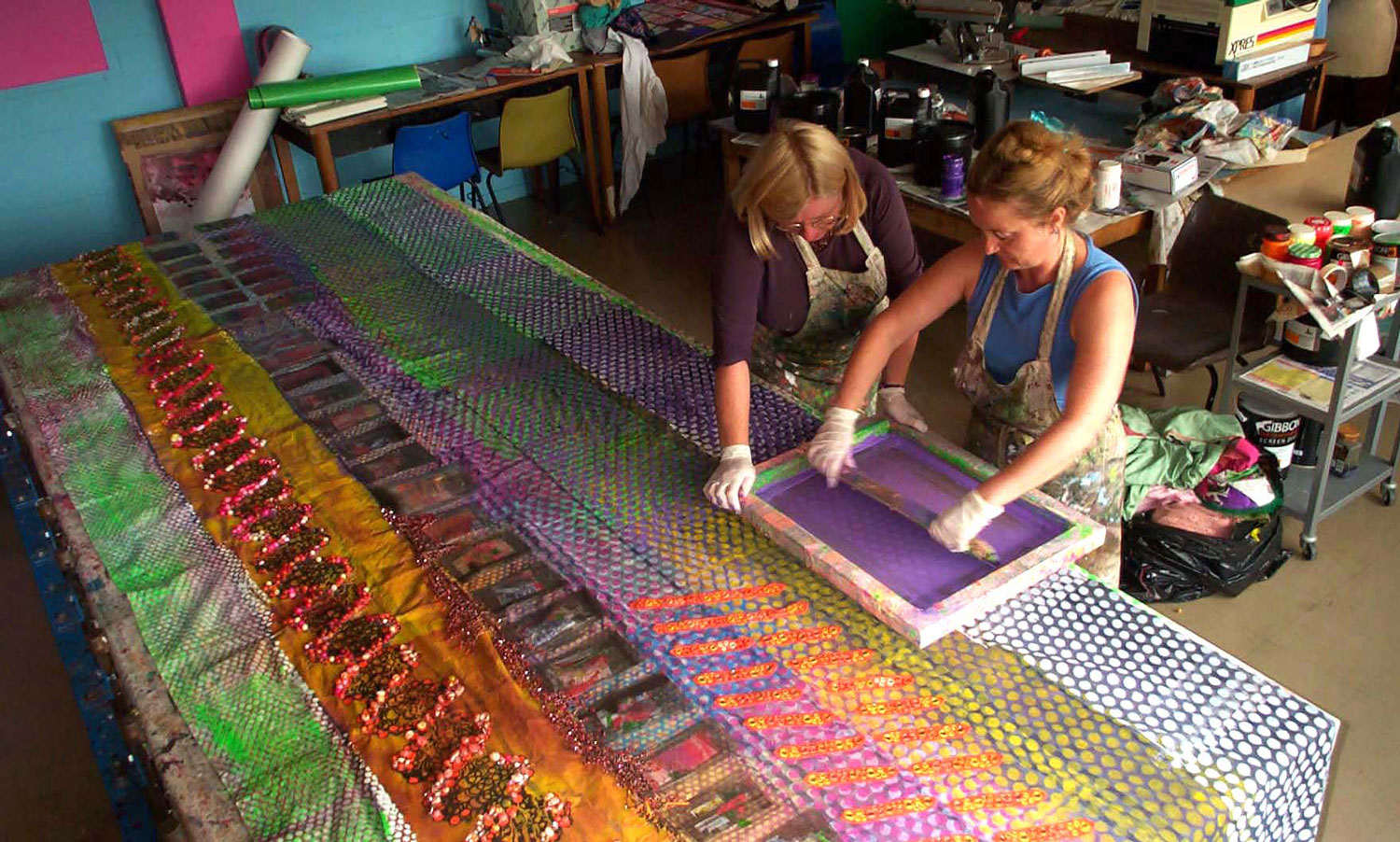 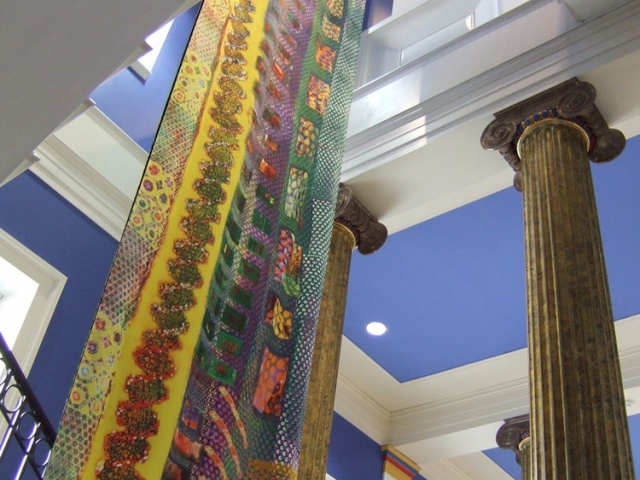 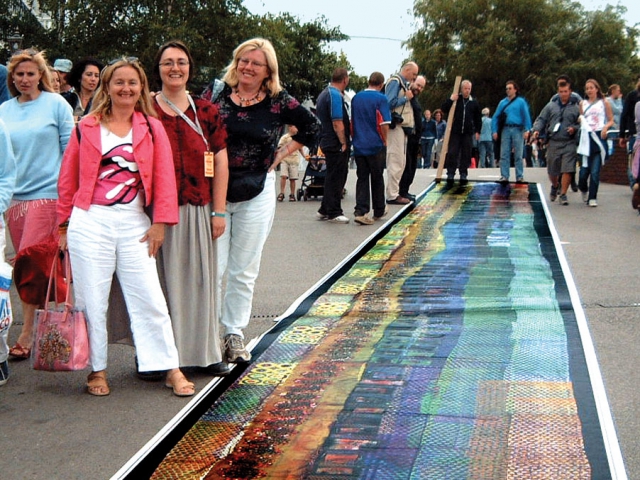 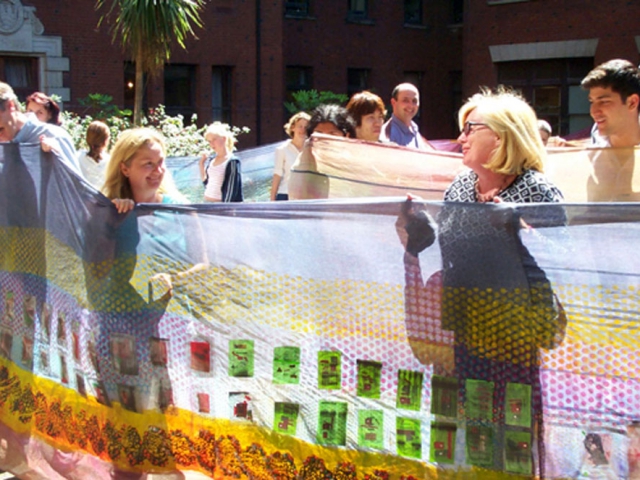 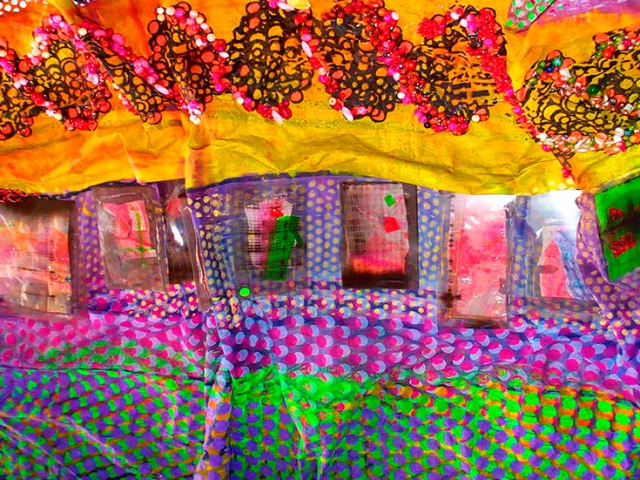 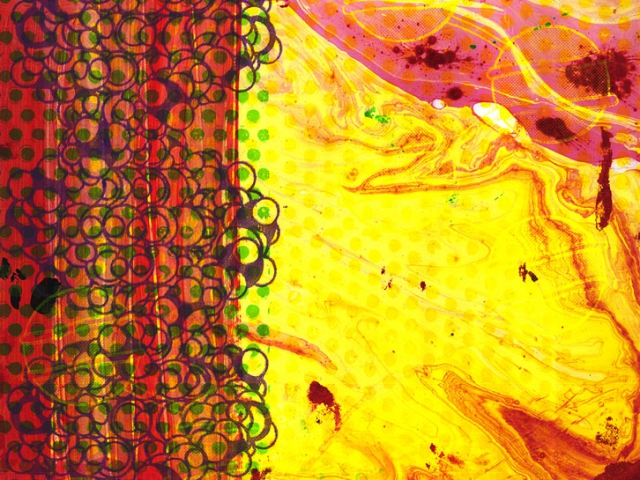 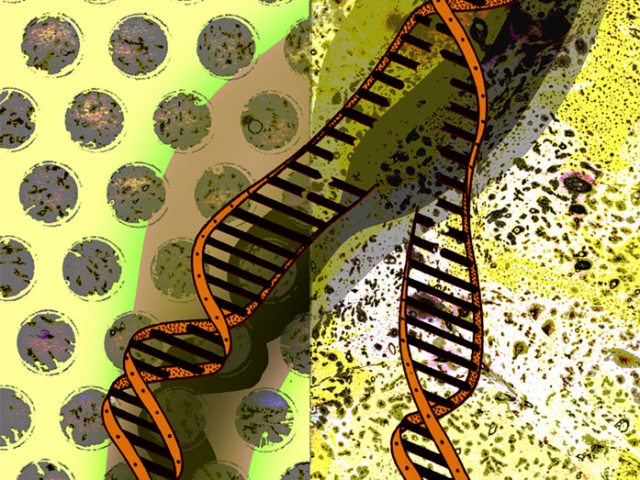 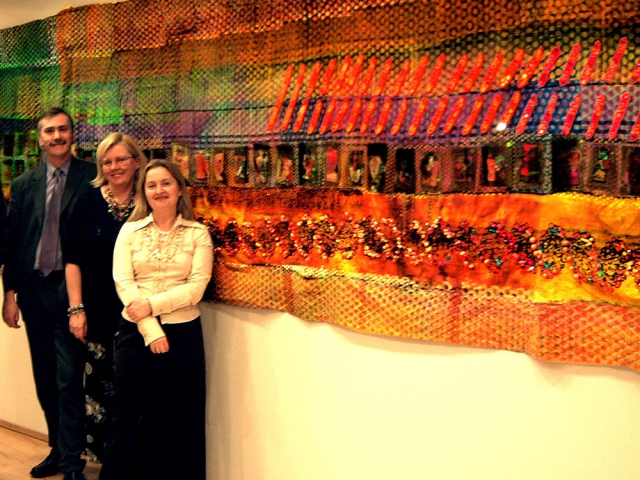 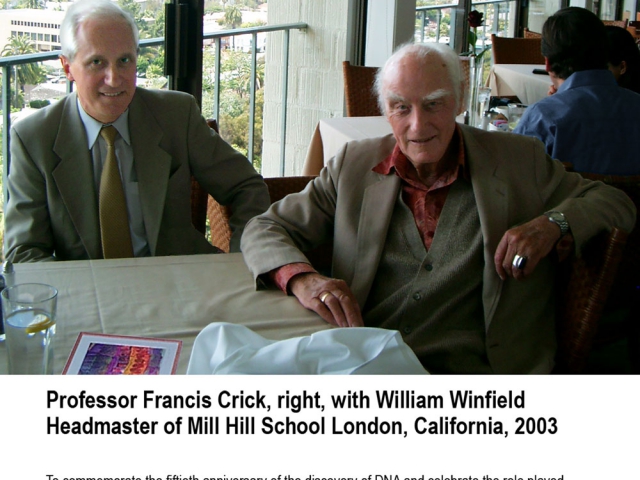 This project was created by Wyllie O Hagan during a two year residency at University College London Hospital. The artists made a monumental 42 metre cross media textile artwork that celebrates the growing awareness of the importance of DNA in Cancer Research, and the positive developments in drug therapies over the last 50 years. They worked with Professor Hartley, Director of Cancer Studies and leader of the scientific team who continues to develop chemotherapy drugs that target DNA

This work was completed to coincide with the 50th anniversary of the discovery of the structure of DNA by scientists Crick, Watson, Wilkins and Franklin.

Reflecting the scientific nature of the subject, Denise Wyllie and Clare O Hagan used neon yellow, green and orange inks to mirror the fluorescent bio-technological images used by the scientists in their work. Using new technology screen inks the work glows in the dark revealing DNA’s hidden structure, complexity, symmetry and beauty. The artists used layering techniques combining die-punching, iridescent coloured sections of canvas and transparent plastic pockets filled with a kaleidoscope of fluorescent red and green plastics, small round mirrors, seed beads, netting, scientific notes, heat treated fibres, folded and crimped metal papers and marbled paper fragments and X ray material. They incorporated the X ray DNA gene expression micro arrays – the plastic film that the scientists use in their work to create a multi layered effect. Combining traditional art practices with new technologies the artists produced an artwork that not only bears testament to the dedication, openness and achievements of the scientists but also highlights the inherent creativity of the artists work.

For ten years the artists worked intensively making and exhibiting artworks, photographs and prints relating to this theme.

The artworks have been exhibited widely in the UK and abroad including: at UCL, the ICH Gallery, London, Atlanta USA; German Institute of Internal Medicine, De Ploeg Gallery in the Netherlands, The Centre for Biomolecular Science, Nottingham, IPOS 2004 Conference, Copenhagan, Drumcoon Education Art Centre, Wigan and Greenbelt Festival, Cheltenham,

Reviewing the Art Science Residency, medical staff and students at UCL reported that it was the most fun and most successful bonding experience the department ever had.

The artists were congratulated on their project Transformations in Science and Art, in an Early Day Motion, tabled in the House of Commons, London.

The artists gained inspiration from imaging techniques used in the UK funded Cancer Research Laboratory and creatively interpreted these in a series of lively and colourful artworks including the following:

Transformations in Science and Art  – A series of photographic prints that show details of the highly embellished emblematic double helix DNA structure.