Latest News – The Innocents – Los Inocentes is in the group exhibition “Stay with Me”: 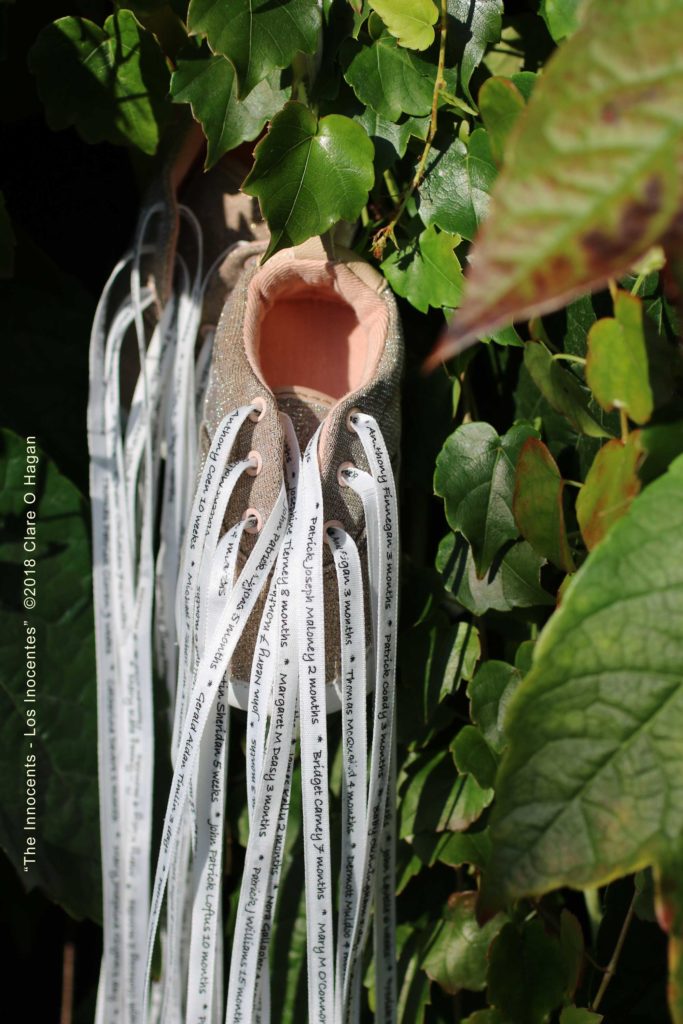 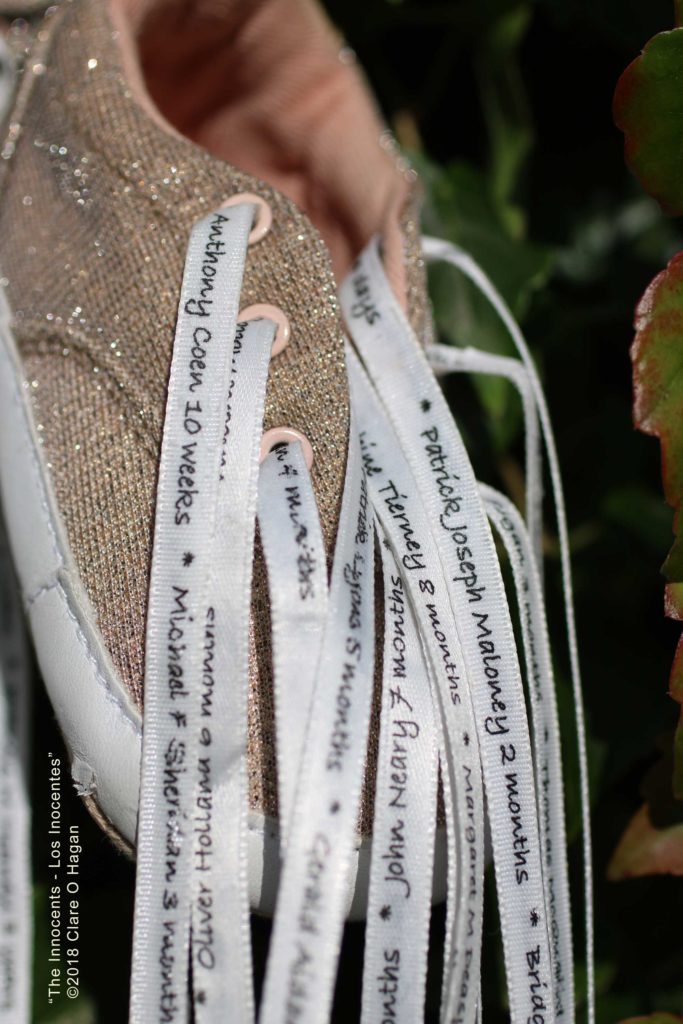 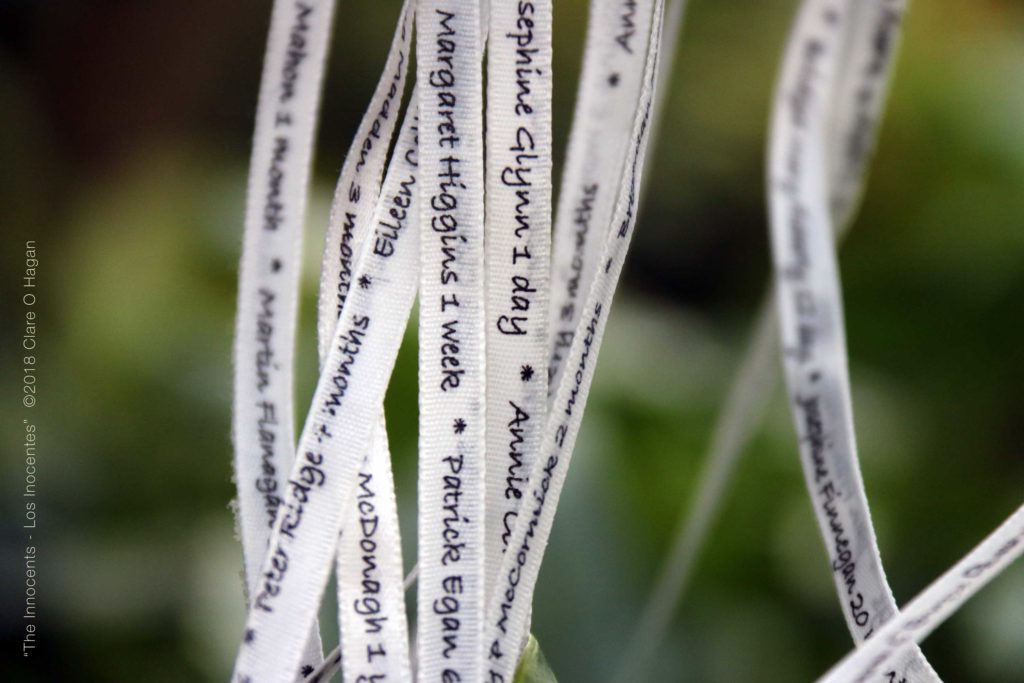 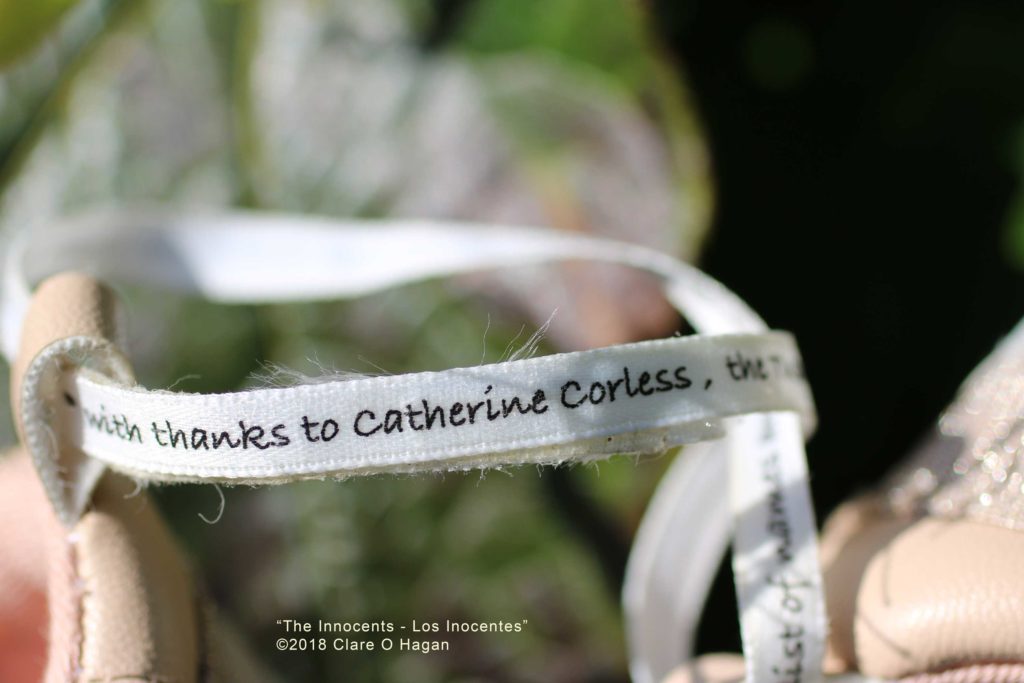 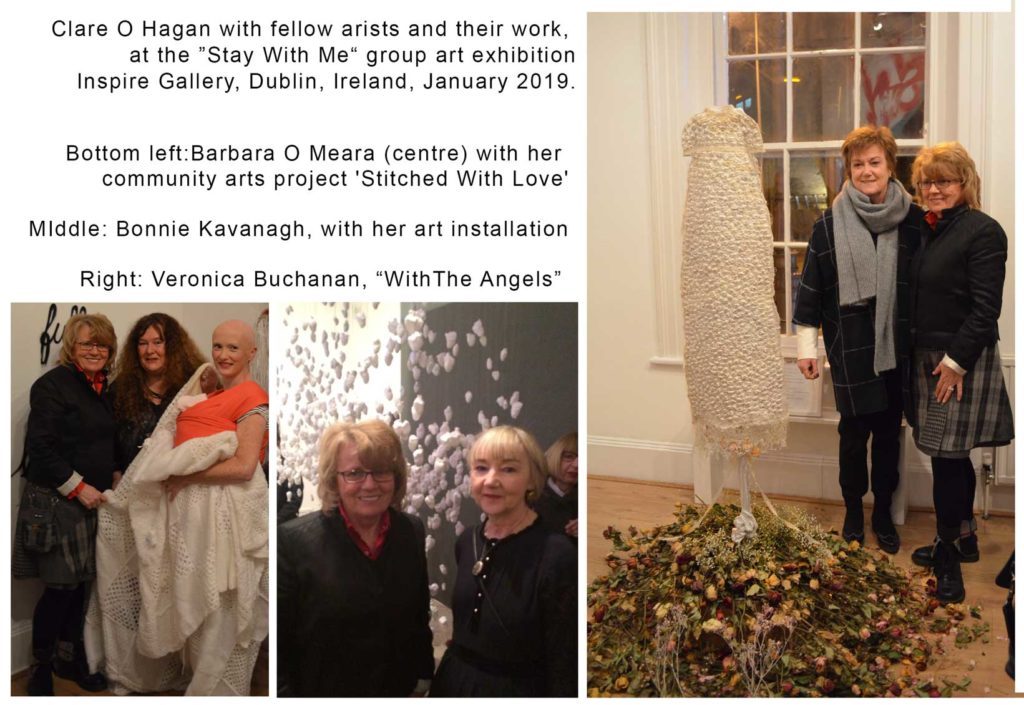 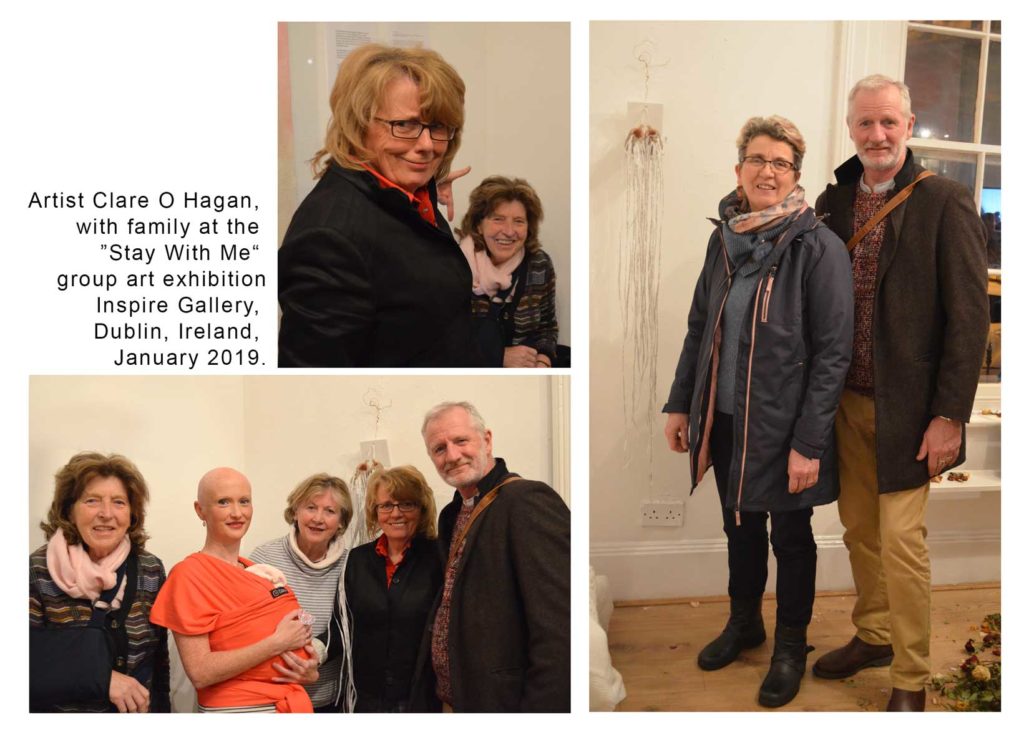 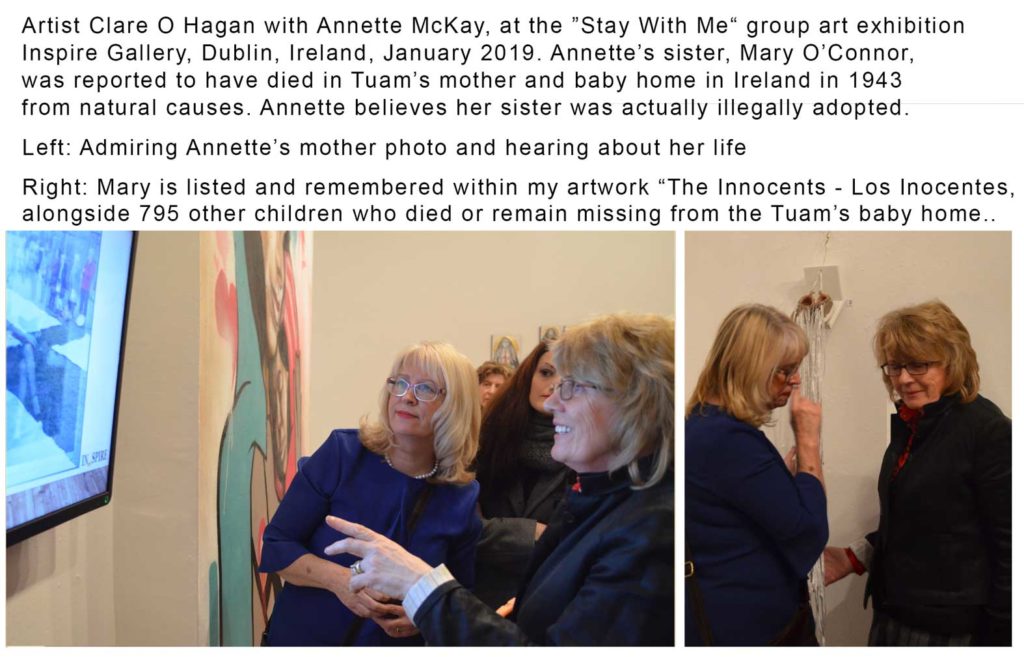 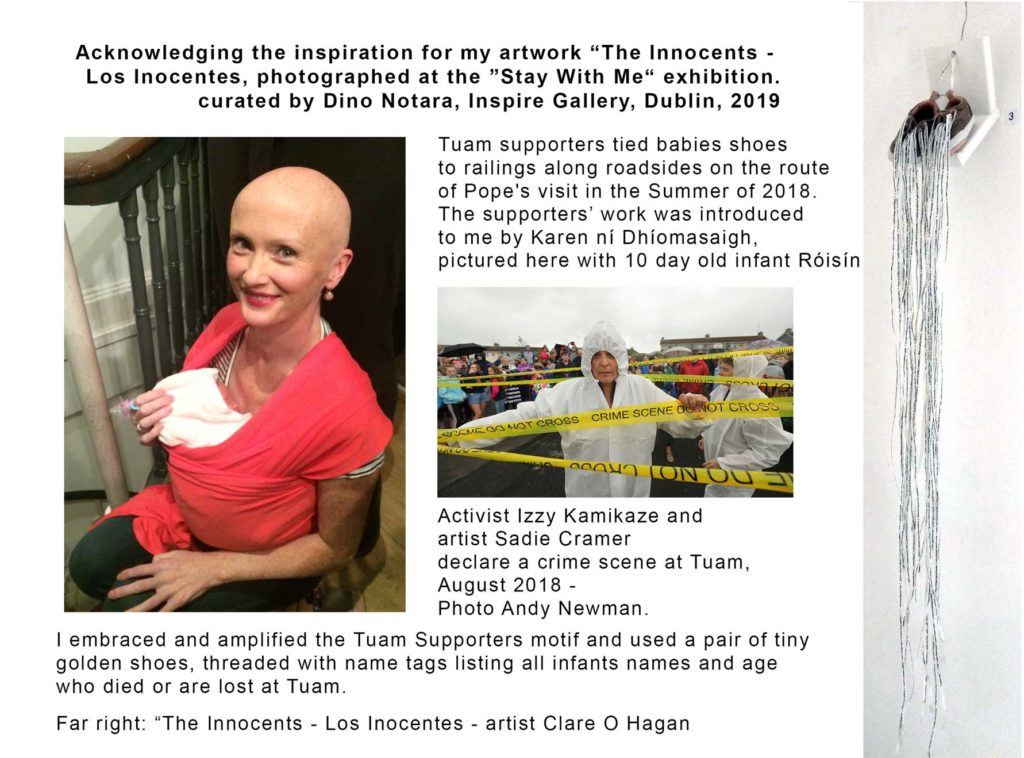 A journeying art installation reflecting and recording the loss of 796 babies and toddlers, born to unwed pregnant women in Tuam, Ireland by artist Clare O Hagan

The Innocents – Los Inocentes takes the form of a cascade comprising multiple fabric name tapes flowing from a pair of infant’s shoes. The tapes, up to one metre in length, document the names and age at death of 796 babies and toddlers who died between 1925 to 1960 at the Bon Secours Mother and Baby Home, in Tuam, Ireland. The remains of these children lie in a mass grave in a disused sewage tank, covered, in part by a children’s playground.

My aim as an artist is to create meaningful relevant work. “The Innocents – Los Inocentes” examines abuse of power, loss and unearthing truths. The installation aims to shed light on the magnitude of the cruelty against women and children by the repressive patriarchy of Church and State in Ireland. Within this powerful visual commemoration tribute is paid to the selfless truth seeker, historian Catherine Corless, whose investigations uncovered evidence about the remains of babies at the Tuam home, giving them a name and a life after death.

Baby shoes, were tied to railings along roadsides in Ireland at the time of the 2018 Pope’s visit highlighting the wrongdoing of the church. This led me to embrace and amplify the Tuam’s supporters network iconic symbol by including a pair of golden shoes within the artwork. The fabric name tapes places an everyday object sewn into clothes, into a new landscape giving identity, form and movement.

On viewing “The Innocents – Los Inocentes” the installation brings to mind a waterfall, where water made from tears, springs from eyelets in the tiny shoes. Within it, the lost children are given the light of day.

The title of the artwork installation “The Innocents – Los Inocentes” intimates a connection between the lost children of Tuam, and the thousands of immigrant children currently being detained by the U.S. Government, many who come from South America.

The title of the artwork installation also refers to a personal event involving “The Innocents – Los Inocentes” which happened in Bundoran, a seaside resort in Donegal, Ireland in the 60’s. Whilst on holiday there, my sister Anne, made friends with a youngster from the local orphanage.They met whilst swimming in a rock pool. Every morning shaven headed girls walked there, in silence, supervised by nuns. The young orphan girl described to us the dreadful treatment she endured. We took her home, without our parents knowledge, hid her and dressed her in warm colourful clothes. In our innocence we thought we could adopt her, but she had to be returned to the orphanage. We wonder to this day what happened to her.

“The Innocents – Los Inocentes” inaugural installation will take place in Los Angeles – The City of Angels, California, USA from 31 October to 6th November 2018 which includes Día de los Inocentes – Day of the Innocents.